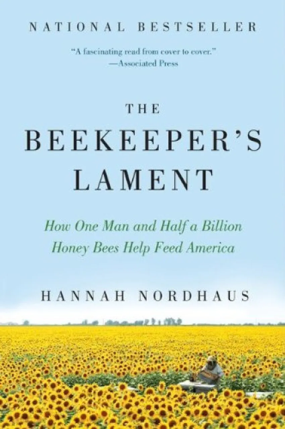 The book that I read for this assignment was The Beekeeper’s Lament. I was drawn to it because I wanted to understand the lives of the people who are involved in the beekeeping industry. I wanted to hear their stories and their struggles, their goals and their fears. Then, after watching the documentary in class and listening to the Bloomberg podcast, both of which feature John Miller, whose life The Beekeeper’s Lament focuses on, I was a little skeptical that reading an entire book about Miller would offer much new insight on top of what I’d already learned. Fortunately, The Beekeeper’s Lament is about much more than the life of one man. It is a holistic perspective that describes not only the state of modern beekeeping, but how historical events and technological advancements made it the industry it is today, the challenges that beekeepers past and present have faced, a look into bee biology and ecology, and most importantly, how all of these factors are intertwined. While someone who is already familiar with concepts like migratory beekeeping, varroa mites, Colony Collapse Disorder, and bees’ importance to the almond industry may find parts of this book too basic or lacking in novel information, I would recommend The Beekeepers Lament to anyone who is just beginning to learn about honeybees and wants a broad primer on the various components that make solving the bee crisis so complicated.

Because The Beekeeper’s Lament reiterated many of the concepts that we’d already discussed in class, it was enjoyable to learn about the books that other groups read that dove deeper into a specific aspect of bees. “Bee Time” provided a unique take on how we can incorporate teachings from bees in order to lead more fulfilling lives. While I’m usually not a fan of the “self-help” genre, I appreciated how the author attempted to connect bees and humans, conveying the similarities between the two species and making the point that nature can be a valuable teacher if we open our eyes and observe the world around us.

The book that I enjoyed learning about the most was “Buzz: The Nature and Necessity of Bees,” which focused on native species of bees. With much of our discussion focused on honeybees and commercial beekeeping, it was nice to gain insight into the bees that receive less of the spotlight but that play just as important a role in our ecosystem.

The fiction books also offered interesting perspectives on bees and their relationship with humans. While their stories were dramatized, they contained plot elements that reflected reality, from hand-pollination to the hive hierarchical structure. One advantage of fiction is that the author can put you in the shoes of a character and make you feel what they feel. Experiencing their struggles “firsthand” can arouse empathy, potentially making readers more inclined to become advocates for bees’ survival.

Overall, each book had a unique story to tell, but many of the underlying themes were the same. Native and commercial bees both play critical roles in their environments, and for better or worse, humans have built a system that depends on bees not only for environmental stability, but also economic stability. Another common theme was the wonder that bees arouse in people. Whether they’re being viewed as subjects for scientific research, a means of putting food on the table, or inspirations for how to live a better life, people have been drawn to bees for thousands of years. While it is daunting to read about the litany of crises that bees are facing, I am hopeful that humans’ persistent affinity for bees will result in action being taken to ensure their survival.